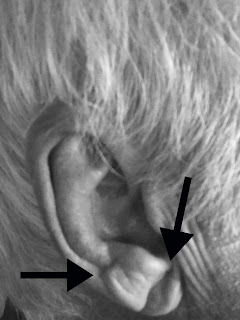 Most of you, I assume, have never heard what I’m about
to tell you. Truthfully, when my cardiologist (who looks
like what you might think an older version of a young
Jimmy Page would look like – not what the old version
of Jimmy Page actually looks like) made reference to it,
I thought he was either joking, or I was hallucinating. But,
please, stay with me, because this, depending upon what you see in the mirror after you read it, might scare the hell out of you.

As I lay in the hospital bed following my second bout with this bizarre malady known as AFIB (atrial fibrillation), wondering if, after all that stuff I’ve lived through, it was this that was going to bring about my demise, ol’ Jimmy walked in with his entourage to tell me what he planned to do about it. He took hold of my wrist for a second and said something to the effect of “It looks like it corrected itself.”  This was after I’d been through nine hours in the ER and about 14 in the hospital room. If it had corrected itself, I was wondering what all those needles and blood lettings were about.

So, what was I to do, other than ask him if it was OK for me to have a Coke? He said, since we weren’t going to do the “stress test” they initially thought about doing, I could have all the Coke I wanted. Then he took his leave, with his pretty nurses behind him. I never even asked him about a cigarette because, apparently, they frown on that sort of thing at the hospital.

My wife was in the room with me. When we were alone I asked “Did he say something about my ears?” She looked as confused as I was, and just said “Yeah?”

Shortly thereafter, my daughter-in-law, the pharmacist, came in and I told her about the mystery of the ears. She asked me what kind of drugs I was on, but Becky verified what I had heard with them. Meg gets out her phone and goes to work on the investigation.

Turns out this is a real thing. It’s called “Frank’s Sign.” From Wikipedia (without citations) “Frank's sign is a diagonal crease in the ear lobe extending from the tragus  across the lobule to the rear edge of the auricle. The sign is named after Sanders T. Frank, MD.’

So, it’s not a universally accepted thing, but Jimmy Page seemed to put as much stock in it as he does in his sunburst Les Paul.  I’ll wait while you take a look in the mirror. I don’t know a tragus or a lobule from a muffler bearing, but I put a couple of arrows in my picture, pointing to the general area of the lobe,for your reference.

I never knew I had these things. Becky swears I always have. So I got out some old pictures, and sho’nuff, there they are. Found a picture of my mom, right behind me, and she’s got them too. Told her, and she says so does my dad. She has always had what she calls “heart palpitations,” and my dad has been on a pacemaker for years. Ain’t that interesting?

By the way, they did not find any blockage, and sent me home with a prescription for some pills I have to take every twelve hours, so my heart rate doesn’t jump to the 200 bpm that took me in there this last time. It wasn’t that high the first time, and all they had to do to bring me back to “sinus rhythm” was give me something in an IV to stop it completely for a couple of seconds. That was big fun. But this time they didn’t do that.

Back to see more docs in the coming weeks and see if they can get this craziness straightened out.  Just wanted all you good folks to take a look at your earlobes and consider going to see a cardiologist, yourselves, if you see anything like that. You know, just to be safe.

And, no, unfortunately, I’m not getting any kickbacks from them.