TRUMP, the new champion of the American right, liberty, and the pursuit of happiness, wants to ban all Muslims from entering the United States. Let’s, just for the moment, forget that’s about the most un-American thing a candidate could say, and not totally contrary to the Constitution that the right wingers have so long claimed as their own. How, in the name of Caligula, are we supposed to do that? How do you confirm somebody’s religion? OH, yes. Weren’t the Nazis able to do that with tattoos in the concentration camps? You’ve got to do it somehow, no? Otherwise, what’s to stop somebody who wants to come to the US from saying, “No, man. I’m Hindu!”? Well, the only reasonable thing to do is put tattoos on them too, because they all look so much alike, you know? And, then, there are any other number of other dark-skinned people in the world who may practice religions that are not Christianity – so we should tag all of them, as well. Hope we get the tags right. Meantime, a native-born white supremacist (no, not Trump, some other one) blows up another federal building, or a Planned Parenthood clinic, or a homeless shelter; or guns down a shitload of school children. The utter stupidity of this guy being the top choice for Republicans is terrifying. Even Karl Rove and Dick Cheney – no paladins of civil rights, themselves – agree. To be clear, it’s not terrifying because he’s there, running without any qualifications whatsoever; without the first clue of how to govern in a democratic society; only as a dictator. This is America. He has a right to do that. It’s terrifying to know that we have that many would-be Nazis walking the streets, right beside us, with the ability to vote ... and to breed. I have to believe he will never be president, but the simple fact that he has so much support tells me that America is lost. The terrorists have won. Trump is Everyman; and Everyman is Trump. “I have existed from the morning of the world and I shall exist until the last star falls from the night. Although I have taken the form of Gaius Caligula, I am all men as I am no man and therefore I am a God.” 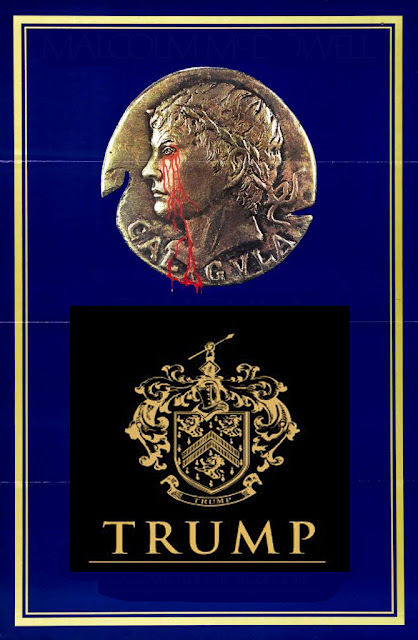 Happy New Year. Dang we're gettin' too old for such politics. Didn't any of that radical stuff we did in the 60's stick? Err, what did we do anyway...

Meanwhile, a Washington Post/NBC poll back in September had these results (I am not making this up):

- 60 percent of Republicans think Trump is honest and trustworthy.

- That *same* poll also found that 59 percent of Americans overall
think Trump is *not* honest and trustworthy.